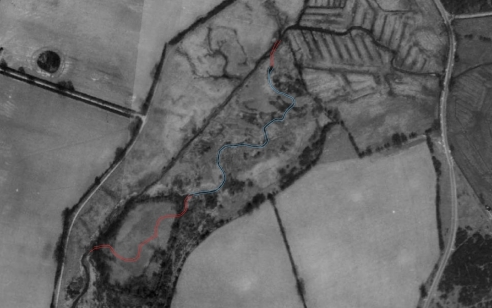 The potential of this project was first identified by Dr Nigel Holmes, who sadly did not live to see its completion.

The aerial photo (1946) above (click on photo for higher res) shows a part of the River Nar which was changed from its natural course hundreds of years ago when the mill-leat for the downstream mill was cut: the straight channel flowing arrow-straight down the west (left) side of the image. Look east a few yards and you’ll see a section of abandoned, natural river highlighted with a blue line.

This relic channel is a true rarity on English chalk-streams. More or less every yard of every river has been modified for one reason or another. To find 500 yards left more or less as the Ice-Age made them is the chalk-stream equivalent of finding the tomb of Tutankhamun.

This project offered the opportunity to restore 500 yards of almost completely unmodified chalk-stream – something that would become a vital reference site for other restoration projects on the River Nar – but also to try to re-create that natural channel with a replica channel which would re-connect the relic channel to the main river downstream.

Channelisation of the river: straightening and the incision of the river bed deep into the land – is dominant physical habitat limitation on the River Nar. The river has been so extensively modified that it is almost impossible to find reference reaches of undisturbed planform and cross-section. At Emmanuel’s Common, not only was the old meander sequence traceable, but the immediate landscape is undisturbed wet waterside meadow and wild-wood. Emmanuel’s Common was a unique opportunity on the River Nar to re-create a natural, fully meandering chalk-stream channel flowing through and intimately connected with a wet woodland and meadow riparian landscape. The ecological value of the restored reach would be immense.

The first job was to survey the relic channel, not only to investigate the characteristics of an unmodified chalk-stream, but also to find reference dimensions of cross-sectional shape and meander pattern for the replica channel.

detail of the planform and level datum survey 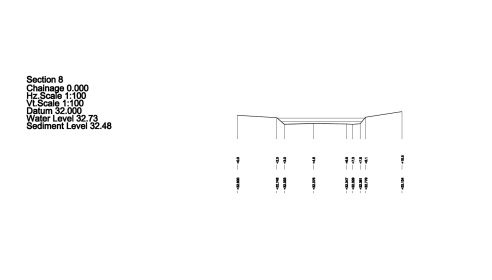 detail of the channel cross-section surveys

The lower channel accounted for 80% of the project time. The available route passed through a slightly raised part of the flood-plain and in the middle reaches it was a challenge to peel away enough ground to make the correct, naturally shallow cross-section. There was very little gradient to play with too.

We took extensive levels of the site. Estimates of gravel depth were sounded using a road-pin driven through the peat. The attached PDF shows how the proposed pool and riffle heights were calculated relative to the existing floodplain and gravel-depth. In fact the gradient proved very tricky. The main river to which the new channel eventually returned had been dredged, and its water level dropped considerably between planning the project and winter delivery. In order to set the tail riffle at the correct height to dovetail with future restorations downstream we had to create a steep chute where the new channel entered the old (this chute is drowned out in summer).

The density and depth of gravel varied greatly. In some places we had an excess and some we had none. Inevitably there was a step as the new channel fell into the over-deep old channel: and here there was very little gravel at the correct depth. Because this step would be very liable to erosion in winter this had to be armoured with gravel moved from elsewhere on the site. Ground conditions were very challenging. It was worth the effort though. When the flows finally broke through the new channel worked perfectly, with good velocity and no unintentional impoundments.

This was as close to actual river restoration as is possible: like peeling varnish off an old painting. A delicate job if the painting is not to be damaged. In practice we went so lightly that it was quite easy. Helen Mandley supervised and Wayne on the digger performed with great sensitivity. See the photos below for the fuller picture. Amazingly there was very little sediment in the relic channel. Within an hour the flows had scoured their way to the gravel.

This project has been a team effort over the years and Nigel’s early involvement is a reminder of that. I’m sure he would have been chuffed to see it come to fruition. The delivery team included WWF and Coca Cola as sponsors, the Norfolk Rivers Trust, the Norfolk Rivers Drainage Board, Richard Hey, Holkham Estate, The Castle Acre Fishing Club, Natural England and others.

The old mill leat. The channel is too wide and straight and has been dredged in places too: which is why it is over-run with burr-reed, while the river tries to establish a more appropriately-sized channel along one edge.

This is the ground which the new connecting channel was cut through at the lower end of the project: an old poplar plantation and defunct pheasant pen.

The relic channel under the trees. The water in this image is just flood-plain seepage, which amounted to just enough flow to keep the channel viable for the past two centuries. Note the shallow profile of the un-modified banks. The channel is shallow too, only 30 cm deep, with a bed of hard gravel under a thin layer of sediment.

The relic channel in the open meadow. Here the old river is almost lost under vegetation, although in practice it was quite easy to uncover it. Note the shallow banks and the fabulous tussocks which the river meanders between. The bed is hard gravel in a shallow channel under a thin layer of sediment. 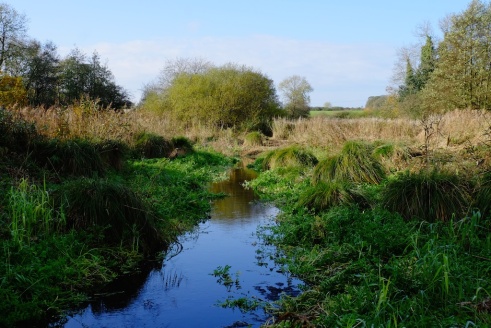 The relic channel revealed. Without touching the bed or banks the weed was peeled aside and folded over onto the edges of the stream. 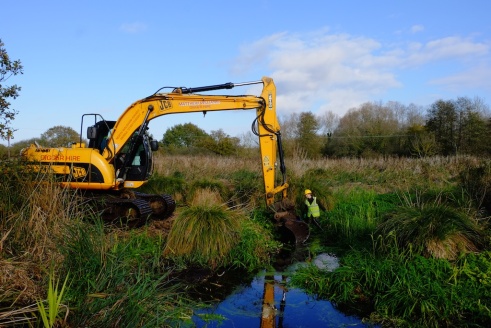 Helen Mandley of the Norfolk Rivers Trust making sure the digger doesn’t damage the bed of the relic channel. The operation was a wetter version of peeling varnish of an old painting: just enough to reveal what’s underneath.

The same view as above, but one year on and with a large brown trout in residence (one for the keen-eyed) 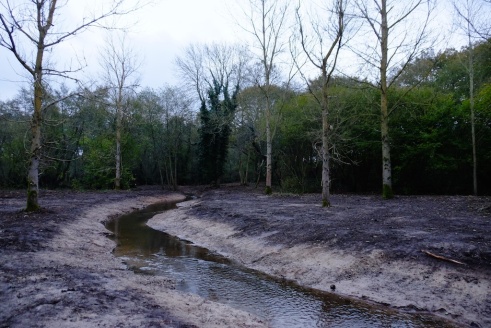 The new channel flowing where the pheasant pen used to be. Still something of a moonscape it will be softened in due course by large woody debris and plants in and along the edges of the channel. The important thing was to replicate the dimensions and planform of the relic channel upstream. Establishing half-a-dozen subtle riffles when there was very little fall to play with was quite a challenge, as was creating shallow banks when the floodplain on the available route was slightly higher than ideal.

The same view as above one year on.

Another view of the new channel.

The same view as above, one year on.

A wonderful moment: the relic channel flowing as the main River Nar for the first time in about two hundred years. It looks happy! 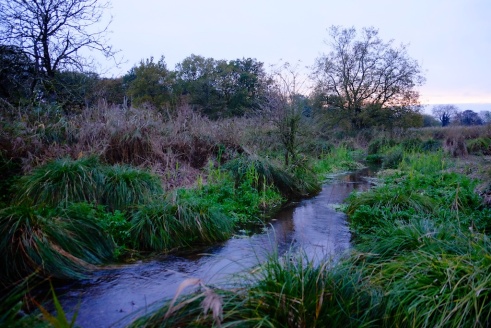 The same wonderful moment upstream: the river looks almost pre-historic. This is a very special site now: a reference reach of an unmodified English chalk-stream. Hen’s teeth are more common.