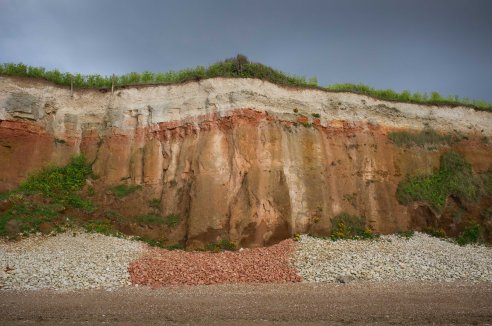 We haven’t seen him for a long time, even though we walk our dog under the cliffs late afternoons. Not every day, but maybe once a week when some chore or other takes us to Hunstanton: shopping or returning a video to the hire shop that smells of copier ink and dead pigeons. Often enough really to think that if all was well we should have seen him in his hooded raincoat and smeared, steamed-up spectacles, hefting those white stones.

But over a year has passed, maybe more. And I wonder if the pile of rocks at the base of the cliff is getting smaller, if the weather and the waves haven’t begun to take it all back again, stone by stone. A lifetime’s work. Camus imagined Sisyphus turning from the top of the hill with a smile on his face. Hunstanton’s own Sisyphus is more enigmatic. Sometimes he talks, though never at length. The first time I saw him moving stones I asked what he was about, expecting a reply in a thick Norfolk brogue. I was surprised to hear an Irish accent tell me that he’d lived here in Hunstanton for twenty-five years or so and that he lived up the hill with his wife. I imagined their kitchen for some reason. Chocolate biscuits on the table. A small dog. A bird-feeder in the window. Bacon fat. He said he’d started then, when they moved here and that he hadn’t stopped. Every afternoon, more or less. Or as often as he could make it down here.

And you’re doing it, I asked him, to stop the cliffs from eroding?

He turned and threw onto the white pile the three or four stones he’d held in his rolled up coat-front.

Do you think it’s working? I asked.

But he had his back to me already and was walking briskly towards the water line taking short, sharp steps. He paced left and right, eyes downwards. He stooped for a stone. He moved like a bird.

I dunno, he said coming back. And then as he threw more stones onto the pile he asked, what do you think?

I looked along the line of cliffs, as far as the corner where the wrecked boat lies. They’re layered like a cake those cliffs at Old Hunstanton: carstone, red chalk, white chalk. A few million years in their making and a hundred million years old. Great slabs of the white rock lay in jagged piles at the foot of the cliffs and the deeper the undercut in the soft red carstone, the deeper the pile of chalk rubble which had tumbled from on high. It didn’t, I thought without saying, make a blind bit of difference.

Who knows? I said.

Only now, I’m not so sure. Because he takes what the sea takes and puts it back. Over and over again, like Sisyphus rolling his rock. And there is, more or less, a smile on his face, though I sense he weathers the endless questions much like the cliffs weather the sea, crumbling occasionally to a grumpy reply. And now I come to look more carefully, there is no mound of chalk rubble or undercut where he piles his round stones.

But his pile is getting smaller each time I go and has been for a year or more. Is he still there, Hunstanton’s very own Sisyphus? Or has the sea won already – as it will win in the end?

Answers on a postcard please. Preferably one with a picture of the cliffs.